We are delighted to have just received these images and look forward to adding more detail to this page. 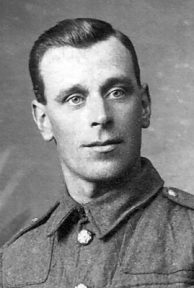 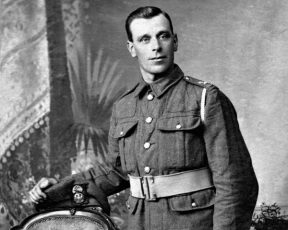 Private Andrew Struthers of Knockintiber who was killed on 2nd October 1918 age 29. His wife was Mary and they had three children Andrew, Mary and Florence. He is buried at Masniers British Cemetery, Marcoing, France. His wife’s brother was Frances Cummings, Royal Engineers 176th Tunnelling Coy. He was killed on 30th April 1917 aged 41. He is buried at Aubigny Communal Cemetery. His name also appears on the Crosshouse War Memorial. 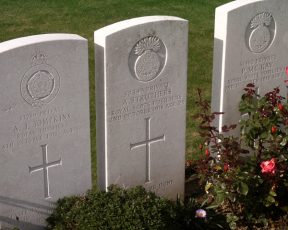 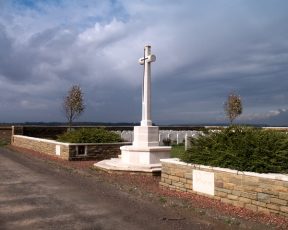 Masnieres was captured by the 29th Division on the 20th November 1917, the first day of the Battle of Cambrai. On the 30th November and the 1st December, Masnieres was held by the same Division against repeated attacks, but it was evacuated, under orders, on the night of the 1st-2nd. It was retaken on the 29th September 1918, by the 62nd (West Riding) Division. Masnieres British Cemetery was made by the 3rd Division Burial Officer in October 1918. There are now 167, 1914-18 war casualties commemorated in this site. Of these, 17 are unidentified. All fell in September-October, 1918. There are also 59 German burials here, 40 of which are unidentified. Masnieres British Cemetery covers an area of 995 square metres and is enclosed by a stone rubble wall. On the main road, East of Masnieres British Cemetery, is the Masnieres Newfoundland Memorial, recalling the share of the Royal Newfoundland Regiment (then part of the 29th Division) in the Battle of Cambrai 1917.