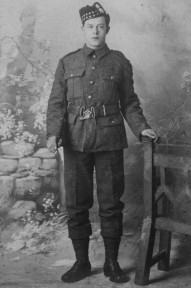 John Domigan Cook was born on 20 April 1894 at 4:15 am at Hemphill Rows, Kilmaurs, Scotland. He was the son of Andrew Cook and Agnes Domigan. Agnes died of TB on 27 January 1895. John went to school in Crosshouse until the age of 14, then began a career as a coal miner.

In October 1914, he volunteered for service and joined 1/4 Royal Scots Fusiliers in Kilmarnock. On 19 May 1915 he began his deployment at Stirling and departed Liverpool aboard RMS Mauritania on 21st May. On 29th May, Mauritania anchored at Mudros Harbour, Lemnos, the main port of disembarkation for the Dardanelles (Turkish) campaign.

After a month of heavy bombardment, the British and French forces mounted an attack on the Turkish front line, in what was to be known as the 3rd Battle of Krithia. This took place on 12th July 1915, 100 years ago. Their objective was Trench E11, NE of Parsons Road (first image).

The attack began at 7:35 am. By lunch time (time unspecified) a roll-call revealed that 49 other ranks were dead and 62 missing. John was amongst the missing. His body was never found. He was 21 years old. He is remembered at Cape Helles and on the Crosshouse Community War Memorial. 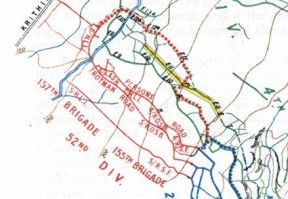 1/4 RSF attacked from Parson’s Road. Their objective was trench E11 (yellow). It is about 500 yards from the RSF position.

Information by Malcolm Hole:  John was my Great Uncle. The only known photograph of him came to light in March 2015.